A virtual reality, fan made, free to play game, developed in Unity, based on the anime Attack on Titan. The game was built from the ground up to run on the Oculus Quest available on SideQuest. This version was made to run on PCVR.

The game can be played offline or online multiplayer with cross play support between Quest and PCVR.

A big thank you to buymeacoffee members and testers that enabled this update.

Try out the new Armoured Titan in v0.2.1

To get the build to work on vive/valve:

-right-click on the Revive icon Task Button (by the time / date) and select "Inject..."

you cant be in a party cha

it is very good

yeah it wont launch for me either

The creator of this amazing game I enjoy playing should add thunderspears and fight with marley/reiss crystal basement that could be pvp or shooting to bots. pls do it, it would be nice instead of adding new titan with AI

It literally says in the second paragraph yes

Is it just me or are there no titans

fire a red flare, that will make them spawn in

I was so hyped but not working on hp reverb g2 i guess :(

How do I download to oculus quest 2 without pcvr?

Refer to this guide. Initially, you will need a laptop or desktop computer or an android mobile device, however once the game is installed you can play the game wirelessly and the headset will be running the game.

You should release this on steam.

I love the game Btw

Help I am playing on index and when ever I start the game I can see the game on my monitor but im stuck in steam vr home. I still see my hands moving on screen but I just cant see through my headset. I followed all of the instructions and I have played this game before on index in an past update but uninstalled when I got bored a while ago. decided to play again and this happened pls help

This game  was sheer amazing. I maybe no Levi but damn i had a blast

Would be lovely to have the android akp on here and not only on sidequest. My friend does not have the ability to sideload but does have a file managerfrom the one time he could. Just a sugestion.

The apk can be downloaded from the discord

It took me 2 days to learn all the mechanics, like leg slashing, now im a titan slayer god

Love the sandbox vibe and excited for crossplay.
But as many have suggested, A LITTLE better hit detection, or making it momentum based would be a godsend.

That and a simple campaign, but I understand not seeing that for some time.

Yo I just spent 2 hours learning how to play this game, my high score was like 13 in the end lol.  This game is great,  they should add more titans and stuff like that.  Imagine there was a story mode lol

I wish they added more titan skins like the one with a giant head and eyes and a small body or the beast titan but still I love the game :)

-right-click on the Revive icon Task Button (by the time / date) and select "Inject..." and select to Unity Attack on Quest build

If you have any issues, it will be easier to communicate on the discord, for which you can find above.

does this work on the rift s?

-right-click on the Revive icon Task Button (by the time / date) and select "Inject..." and select to Unity Attack on Quest build

If you have any issues, it will be easier to communicate on the discord, for which you can find above.

I only own the HTC Vive for steam, is there a way I can play this game? it says run revive as administrator and right-click on the Revive icon Task Button but I have no idea what those are or where to get them.

To run revive as administrator, right-click the revive icon you can find somewhere on your computer, select "run as administrator". The Revive Icon Task Button is typically on the bottom right of your desktop, right next to the date/time. If you have any issues, it will be easier to communicate on the discord, for which you can find above.

How can I use this on Virtual desktop? Every time I launch it, it flat out crashes, and I've done this for weeks. How can I fix it?

why use virtual desktop? if you have quest, then you can just use the quest version

have you found a way to make it work?

i press inject and select the game.  what i do next

Can i get a more detaled instructions for valve index?

how do i downlode this  without a pc?

Will there be titan shifting?

pov: you are not funny

its not supposed to be funny dumbass 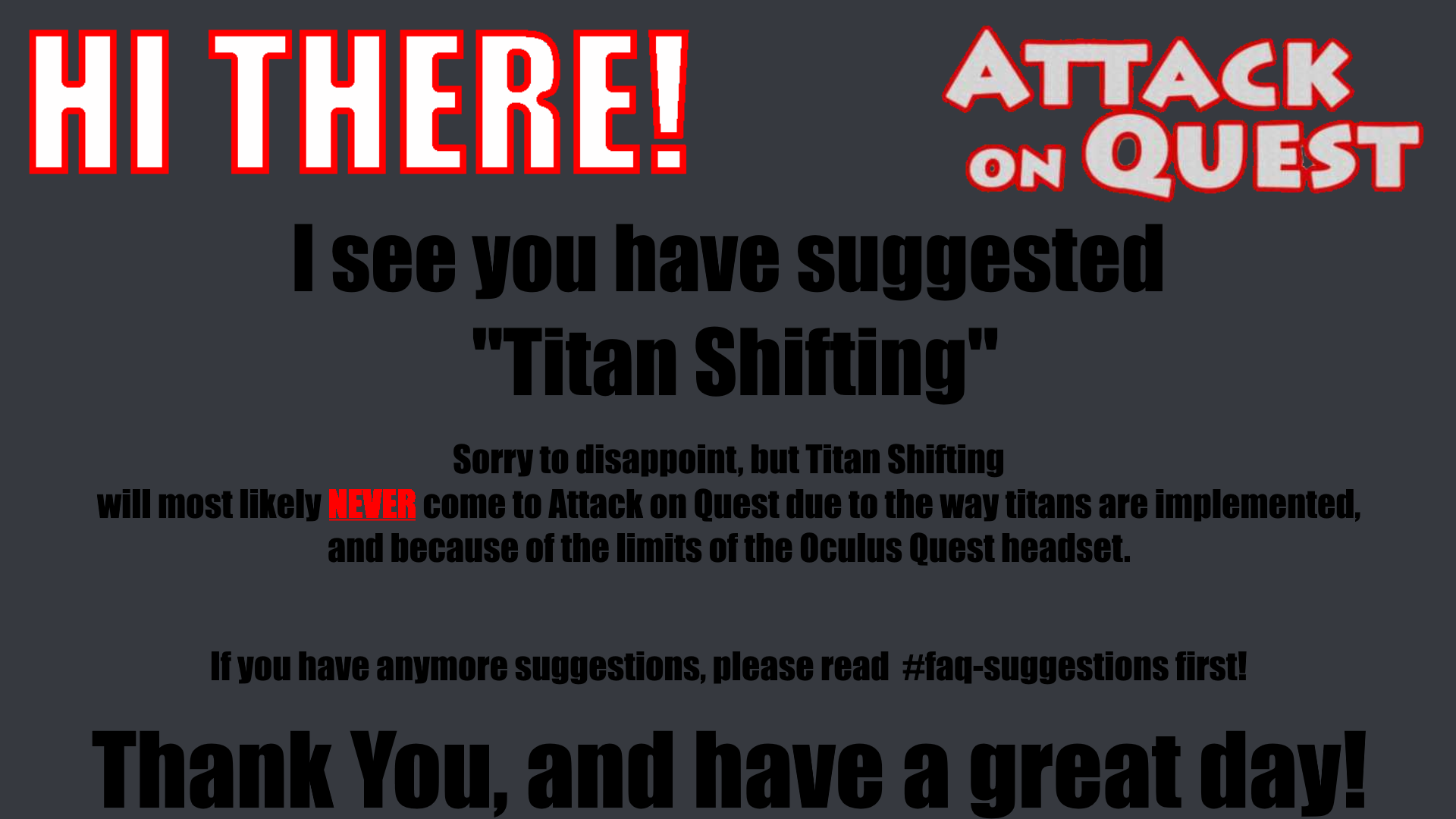 TL;DR: Great game with polished mechanics that rarely bug out. It is obviously still a beta build but it is still great deal of fun and incredibly addictive.  And can be played both seated and standing

Now to talk about the gameplay:

It's fantastic. The feeling of flying trough the air at mach speeds feels great and is incredibly addicting and the fact that there isnt any other games that offers gameplay like this makes it even better. The ODM gear is easy to learn but difficult to master and this is great! The lack of a skill tree or any system like it is made up for by you developing your own maneuvers and skills as you use the ODM gear more and more. And most people even slash thier blades in different customised ways. The target of the titans nape is big enough to be realiably hit but small enough so you can't just luck out. And the maps are great for both experienced players and begginers in thier simple complexity. Making them suited for high and low altitude maneuvering.

Now for some things that can imrpove certain things:

Add a system so that you can controll you gas output in exchane for speed for the grapple reel in and stronger boost's with a slider or a percentage bar. Have it so that things like boost controll have to be unlocked by killing titans and give the player a notification when they unlock it. this will encourage people to try it amongst other things. Add a system where you can upgrade things such as blade durability or gas capacity to give people a goal to atcually play the game instead of just slashing titans.

While it was disorienting that you couldn't swing with the ODM gear but instead had to reel in and turn to swing around stuff this sounds like a bad feature but it gives the player alot more controll and ease of positioning up for a good clean hit for the titans nape. The ODM gear feel's incredibly polished and I personally have never expereinced any bugs with it and it feels natural to gain or lose altitude as needed just by using our instincts. And the detail that the grapple line reels out is such a small feature but it allows for alot of move's that would be inpossible without it.

Thank you for posting such a detailed review!

I may just add boost control (with upcoming additions such as flips) as an unlockable with notification popup to help with visibility for new players.

What means right-click on the Revive icon Task Button (by the time / date) and select "Inject..."

When Revive is open as an application in the background, it should have an icon found in your taskbar near the bottom of your desktop window close to where you see the icons for your internet connection sound, and date. If there are multiple applications all running in the background, you may have to click the upwards pointing carrot which should then display the Revive icon. Then you just right-click the Revive icon and follow the rest of the instructions. Hope that helps, cheers.

I honestly don't know how you've come up with the movement mechanics, all I can say is that it's by far the best and most innovative I've ever seen in any game, vr or not. I really hope you're planning out on releasing new updates for the game since it's basically drug to me as of now, and I'm also happy to notice that whenever I log in there's always a couple online lobbies up and running for me to hop into and enjoy some coop against the armoured titan. I'd like to see more truthful 3d models used for giants, since these don't really look like the original ones, but the graphics is very polished and clear despite it being positively poor, and experiencing the game at full 80-90 FPS is an absolute blast. I don't usually ever post any comment on any platform because I'm very shy, but I needed to tell you that the game is awesome and that it did a great job at making me feel like i was part of the aot world, and since I think videogames are first of all a matter of emotions, this is basically priceless.

Thank you for making this and I hope you keep up the good work. <3

Hi can you make the apk file available here too? My pc is like 7 years old and can't run vr but I do own a Quest 2.

Tho everytime I try dowloading a game from sidequest to I just get the error massage saying it needed 4 more bytes.

Tho it does work if I simply transfer the APK file from my pc to my Quest 2.

I don't have a clue how to fix the "need 4 more bytes" error so please if it isn't too much hassle.

Your game looks really intresting and I wanna atleast try it.

I take this back I found it on github at

tho i think there should atleast be a link to the github on this page who isnt a random dude with a shitty 7yr old pc.

The dude who has a shitty 7yr old pc

Sorry I took so long to reply, I'm not often on itch, a direct download link is always available on my Discord also. Cheers

Could you maybe add a tool like the sword and flare gun that is a hand that when you put it to your face you turn into a titan and can fight other titans like that?

HOW THE F I MAKE IT WORK ON VALVE INDEX

WHAT YOU SAY DO NOT WORK(or i think)

Hello creator of this game I would like to tell you that there seems to be a problem with your game. For one of my friends the voice chat glitches when he plays the pcvr version. It would be great if you could fix it.

How do i play the the games, i mean connect the oculus to pc and play it

If you have an Oculus Quest, there is a seperate version available at : https://sidequestvr.com/app/502/attack-on-quest

For Oculus Rift: once downloaded, unzip the game files, have the headset connected with the Oculus software running., then launch the executable file. 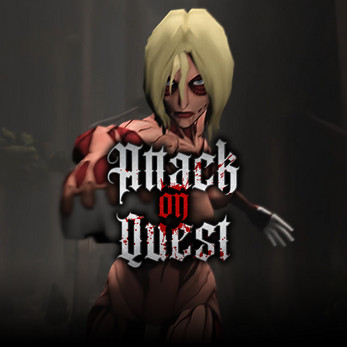